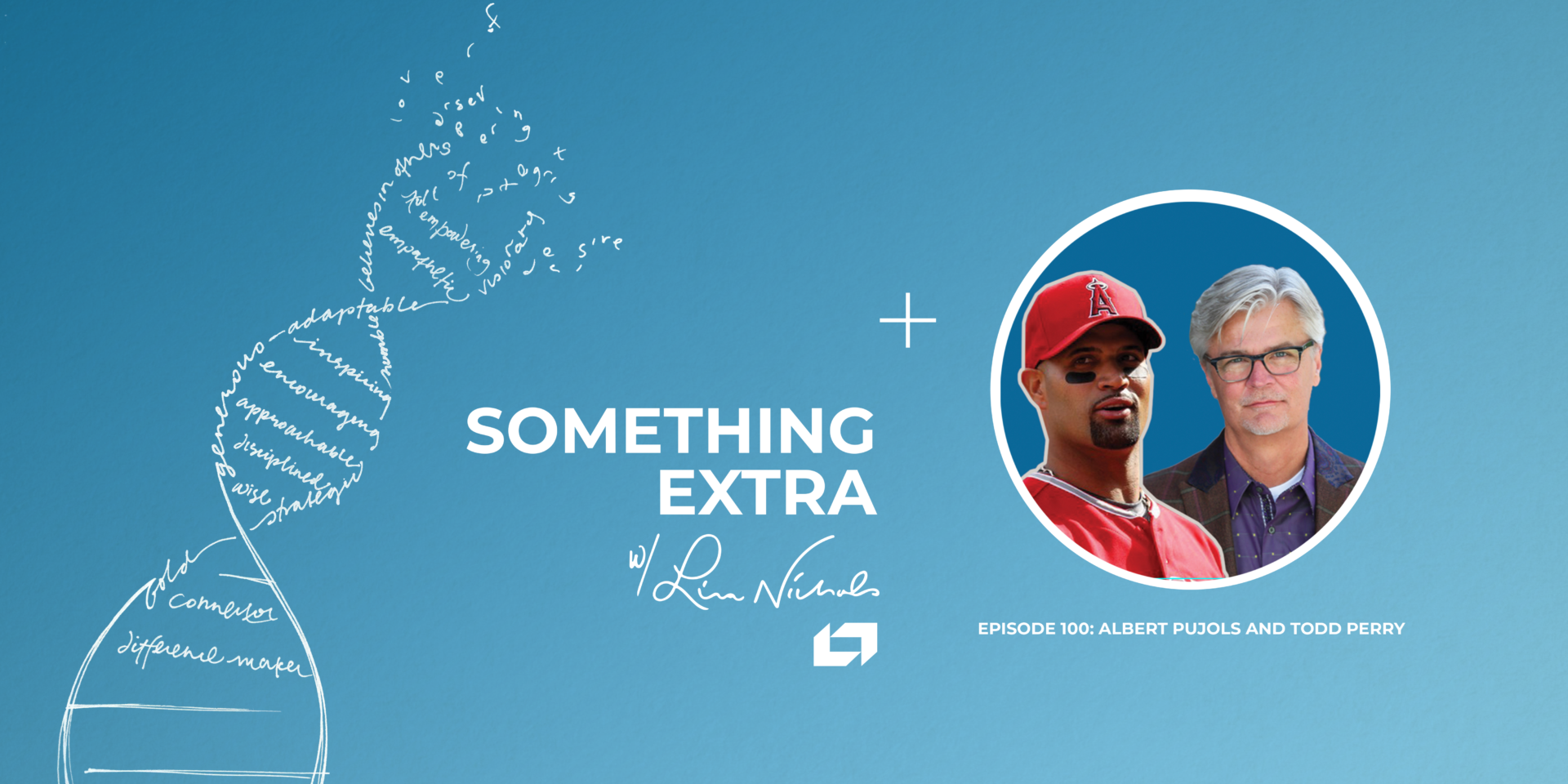 Since 2018, we have had the incredible privilege of hearing outstanding leaders share their stories and something extras with us. Episode 100 is no exception. Take a few moments to listen to Albert Pujols and Todd Perry give wisdom on leading with passion and generosity.

José Alberto Pujols Alcántara was born January 16, 1980, in Santo Domingo, Dominican Republic. Albert moved to the United States in 1996, and at the age of 16, attended Fort Osage High School in Independence, Missouri. While there, Albert was twice awarded all-state honors in baseball. He earned a baseball scholarship and attended Maple Woods Community College in Kansas City where he played one year before being selected in the 13th round of the 1999 free agent draft by the St. Louis Cardinals.

After spending only one full season in the minor leagues, Albert stormed onto the big league scene in 2001, capturing National League Rookie of the Year honors unanimously that year. In 2002, Albert finished as runner-up for the NL Most Valuable Player award. Since his rookie season, Pujols has never failed to finish outside the top four in MVP voting.

As significantly that year, Albert and his wife, Deidre, announced the formation of the Pujols Family Foundation.

In 2006, Albert began the season establishing a new Major League record for most home runs hit in the month of April, 14. Just over a month later, an injury placed him on the disabled list for the first time in his career. At that point, June 3, Albert already had 25 HRs and 65 RBI. Battling injuries the remainder of the season, Pujols finished with a .331 average, a .431 on-base percentage and a .671 slugging percentage. He finished second in the league in HRs with 49 and RBI with 137 and was, once again, runner-up in the MVP voting.

The Cardinals limped into post season play that year with a record just over .500, but thanks in great part to Pujols leadership, the Cardinals caught fire, beating the New York Mets in a dramatic seven-game NLCS and then capturing the franchises 10th World Series title, beating the Detroit Tigers in five games. And, on top of his many offensive achievements in 2006, that year also saw the Redbird first baseman capture his first Gold Glove Award.
In 2007, Albert earned his sixth straight trip to the All Star Game, finishing the season with a .327 average, 32 HRs and 103 RBI, marking the first time in baseball history a player had surpassed .300/30HR/100RBI for seven consecutive seasons at the beginning of a career.

Albert won his second Most Valuable Player award at the end of the 2008 season. In addition to his usual numbers with 30+ HRs/.300+ avg./100+ RBI, Albert also achieved two milestone accomplishments during that year. He clubbed his 300th career home run on July 4, and his 1,500th career hit on August 30. Following the 2008 campaign, Pujols became the second player in history to win the MVP and Roberto Clemente Award, the latter given for accomplishments off the baseball field, in the same year.

Albert began the 2009 season as the NL Player of the month for April, the fourth time in his career he had been so honored. At the All Star break, he led the Major Leagues in both HRs (32) and RBIs (87) and was the leading vote-getter for the All Star game, held in St. Louis for the first time since 1966. He became the 7th player in baseball history to reach the 30 HR mark before July and set a Cardinals franchise record with his eleventh career grand slam on August 4th, in New York City. Albert ended the season with a .327 batting average, 47 home-runs and 135 RBIs. Numbers good enough to earn Pujols his third National League’s Most Valuable Player Award.

At the end of 2009, Albert was also awarded ‘The Player of the Decade’ honor by both The Sporting News and Sports Illustrated.

In August 2010, Albert hit his 30th home run of the season, extending his own major league record of the most consecutive 30 home run seasons to begin a career. Later that month, he hit his 400th career home run, becoming the first player in major league history to reach the milestone in his first 10 seasons. In the same game, he hit his 30th double of the 2010 season, extending his consecutive seasons of 30+ doubles to 10. Albert won the National League Player of the Month Award in August for the sixth time, more than any active NL player.

In September, Albert reached 100 RBIs for the 10th consecutive year and reached 40 home runs for the sixth time in his career. Only six other players have more than six 40 HR seasons. At the conclusion of the 2010 season, Albert won his second Gold Glove Award and the National League Silver Slugger Award at first base, finishing second in the NL MVP race.

In July, Pujols got his 2000th career hit, against the Chicago Cubs. On August 14th, he hit the longest home run at Busch Stadium III, estimated at 465 feet.

As part of the Cardinals improbable run to the 2011 World Series, Albert joined Reggie Jackson and Babe Ruth as only the third man in history to hit three home runs in a World Series game. That same game, Game 3, saw Albert became the first player in history to get hits in four consecutive innings, as he set the record for most total bases and tied records for the most home runs, hits, and RBIs. Game 3 marked Pujols’ 70th post season game. Over that span, he hit .343 with a .444 on-base percentage, a .630 slugging percentage, and 18 home runs with 52 RBIs.

Todd’s career has spanned several different positions in marketing, design and product development for companies such as Brunswick, Murray Ohio Manufacturing, Roadmaster Corporation and even Mercury Records in London.

Among Todd’s many corporate accomplishments: directing the design and development team for Roadmaster Corporation, named during his tenure as one of Fortune Magazine’s 100 fastest growing companies.

Most recently, Todd was vice president of market development for Cardinal Brands in St. Louis, before helping to launch the Pujols Family Foundation as Executive Director in 2005.

Before joining the Pujols Family Foundation, Todd was active as a volunteer for a number of non-profit organizations, including The Bridge Teen Center, and served as a committee member for Christian Family Day, an annual promotion held in conjunction with the St. Louis Cardinals.

When asked about his role with the Pujols Family Foundation, Todd says, “It all comes down to Albert and Deidre’s vision for ‘Faith, Family and Others’. I see my role as a conduit to channel the love and compassion they have for people in need.”

“One person at a time, one family at a time, we are making a significant difference in the lives of so many deserving people.”

“The question I get most often is how and why we started the Foundation,” Perry says. “Over time, I have shortened the long one-hour story to simply: God had a plan and we were obedient to it.”

Todd lives with his wife and two children in St. Louis County.

Albert’s Something Extra:  Passion and generosity: Take the time and talents you have been given and share to bless others.

Todd’s Something Extra: Passion. Passion is one of those intangibles that can’t be taught. You either have it or you don’t. I would suggest that for everyone listening to find something you’re passionate about, do it, and do it well. Take the talents that God has given you and expand on those.